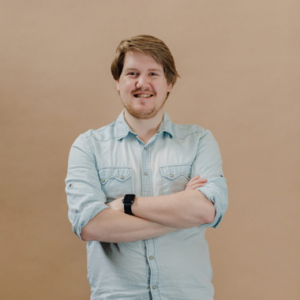 The Esterhazy Singers are pleased to welcome David Halstead as our new Musical Director from October 2021. David has taken over leadership of the choir from Andrea Brown, who has stepped down to pursue other musical opportunities after five successful years.

David Halstead works as a freelance Choral Conductor in London. David read Music at Christ’s College, Cambridge, where he sang in the Chapel Choir, as well as occasionally conducting and playing the organ for services. He initially trained as a secondary music teacher, and worked in the classroom for six years, eventually completing a Master of Education (MEd) degree at the University of Cambridge and later studying for the MMus Choral Conducting at the Royal Birmingham Conservatoire, working with Paul Spicer and Simon Halsey amongst other teachers: he finished both courses with Distinction. David founded the Beaufort Chorale in 2015, a chamber choir made up principally of fellow alumni of Christ’s College, with whom he has directed regular tours around the country and abroad. Since December 2018, David has been Director of Music for SAINT, working across many parishes in East London, and he directs the Watford Palace Theatre Community Choir. David looks forward to taking the Esterhazy Singers forward in this 50th Anniversary year, maintaining our focus on excellence and as we continue to embrace tradition and expand horizons.