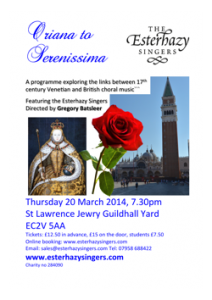 Secretive and seductive religion, love and heart break were the themes explored in 17th century music, seen by many as the time in which Choral music was born. In Venice, also referred to as Serenissima, composers such as Monteverdi, Schutz and Gabrielli were making music popular to masses by bringing it out of the church. In England, Elizabeth 1st, also known as Oriana, was on the throne and composers such as Byrd and Tallis were writing sacred music in secret.

On 20th March 2014, Oriana to Serenissima looked at the vast range of choral music on offer, both sacred and secular and explored how the music of Italy influenced the composers in England. It also examined the fascination amongst musicians with the Lady Oriana’s influence over the musical landscape across Europe.